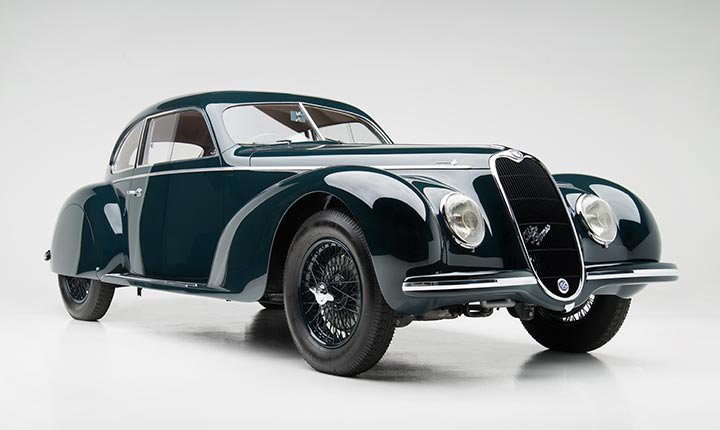 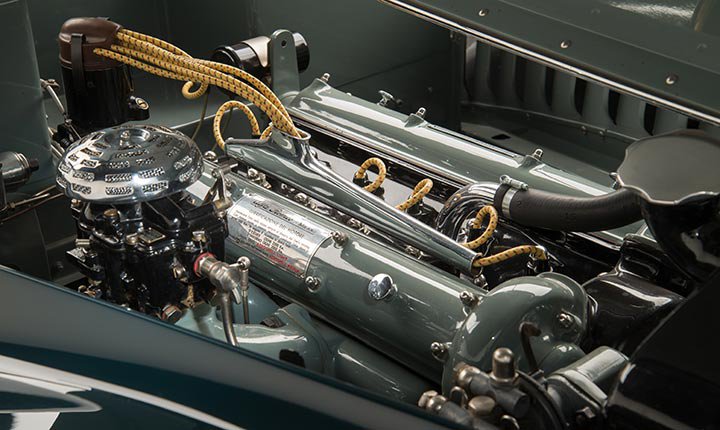 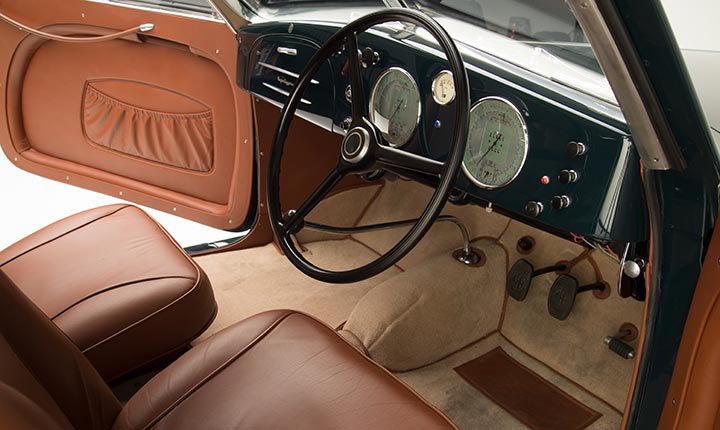 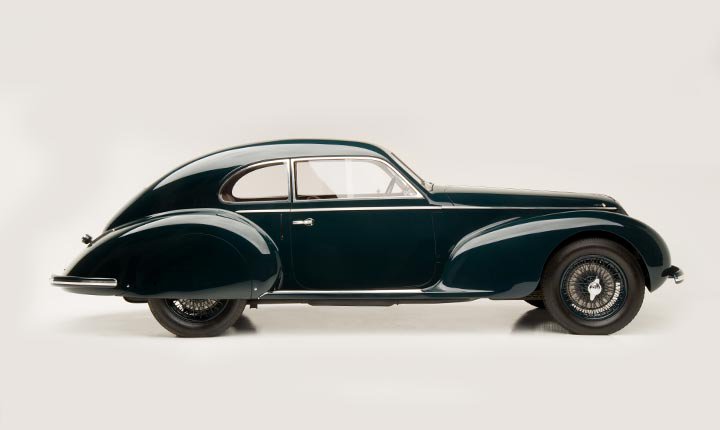 This stunning 1939 Alfa Romeo 6C 2500 Sport Berlinetta is one of just 13 examples with coachwork designed and built by Carrozzeria Touring of Milan, the city in which Alfa Romeo was also based. Its rarity and exceptional beauty make Chassis No. 915030 one of Touring’s great stylistic masterpieces, taking the streamlining ethos that become prominent in the late 1930s and turning it into a piece of artwork.

From the steeply canted front grille and fenders to the sloping sculpture of the rear aspect, the Alfa’s dramatic style and proportions speak to the timelessness of great design. The car is presented here in Barrett-Jackson’s exclusive Salon Collection for the 2014 Scottsdale collector car auction.

The 1939 Alfa Romeo 6C 2500 was the final version of the Italian manufacturer’s renowned six cylinder automobiles that first debuted in 1925 with the 6C 1500, and it marked a pinnacle for the Italian builder of premium performance cars. With production interrupted by war, the 6C 2500 would resume in 1946 and continue through 1953, remaining a highlight of Alfa Romeo history.

Lightweight, sporty and technically advanced, the 6C series was a major boost for Alfa Romeo as it established itself as Europe’s most exciting manufacturer of sports and racing cars, much as Ferrari is today. Spritely handling and brisk performance helped 6C become the most popular Alfa Romeo model of its day.

Chassis 915030 was extensively restored during a four-year process that started in 1994 with a number of Seattle-area craftsmen who completely disassembled the car and renewed every piece to concours quality. Malcolm Harris, who co- owned the car with Charlie Morse since 1990, was intimately involved with the restoration process, reportedly investing more than 1,500 hours of his own time in the project.

The car was repainted in a gorgeous and accurate dark blue-green shade with matching wire wheels. The simple but well-appointed interior was beautifully refurbished in tobacco-leather upholstery, and

it remains in essentially pristine condition with seating for five. The dashboard sports its original set of gauges, as well as its elegant three- spoke steering wheel.

The total restoration was completed in time for its first showing at the 1998 Pebble Beach Concours d’Elegance, where it won second in class and, more significantly, the Most Elegant Closed Car Award. The 6C was again awarded Most Elegant Closed Car at the 2004 Ironstone Concours, and again at the 2004 Kirkland Concours. In 2012, the car won the prize as Best Pre-War Alfa Romeo at the prestigious Quail Motor Sports Gathering.

Part of the complex restoration process of the Alfa Romeo entailed bodywork that was created using a fairly exotic method of construction called Superleggera, or “super light,” which had been devised by designer Felice Bianchi Anderloni and patented by Touring in 1936. The Superleggera method would be used to great effect by the design house in producing the 13 examples of the 6C 2500 in both berlinetta and cabriolet forms.

The system involves a framework of slim steel tubes that form the structure of the body, over which are laid the alloy panels of the car’s skin. The advantages of the construction method include the touted lightness as well as providing the designers with tremendous flexibility in fashioning highly original body shapes. The result for chassis 915030 is nothing less than magnificent.

Touring built this car on the 118-inch wheelbase 6C Sport chassis, which was 10 inches shorter than the standard wheelbase. It features all-independent suspension, drum brakes for each wheel and a 4-speed non-synchromesh transmission. Higher gear ratios in the final drive allow the 6C 2500 to cruise comfortably at higher speeds and attain 100 mph.

The Inline six cylinder engine traces its lineage to earlier competition models and was originally designed by Vittorio Jano. The engine was later updated for the 6C 2500 by Bruno Treviso with a larger bore and higher compression, reaching an output of 95 horsepower in the Sport configuration. The advanced design of the 2.5 Liter (150-cubic-inch) engine features twin overhead cams and hemispherical combustion chambers. Competition versions of the 6C engine in the SS Corsa race cars were rated at 125 horsepower.

The shadow of war was spreading across Europe when this Alfa Romeo was produced, and because of the conflict, the early history of 915030 is hazy. The car was imported to the United States in 1962 by Earl Potter of Chicago, who then sold the Alfa in 1965 to John Jumer of Elkhorn, Wisc., and Chicago. Jumer kept the car until it was acquired in 1990 by Morse and Harris, who then performed the total restoration. The car is now being offered by the famed Blackhawk Collection of Danville, Calif.

Alfa Romeo’s history begins in 1910 with the founding of A.L.F.A., which stands for Anonima Lombarba Fabbrica di Automobili, with the company’s early cars designed by Giuseppe Merosi.

The manufacturer quickly got into racing, including an entry in the 1911 Targa Florio. In 1915, A.L.F.A. came under control of Nicolo Romeo, though production ceased during the First World War. After the war, the company resumed production as ALFA-ROMEO, which became Alfa Romeo in 1920. The financially ailing company passed into Italian state control under Benito Mussolini in 1932.

Alfa Romeo became synonymous with high-performance race cars and sinewy sports cars during the 1920s and 1930s, and won the inaugural Grand Prix world championship in 1925.

The 6C 2500 is considered to be the end of an era for Alfa Romeo and the last of the great coach-built cars of Alfa Romeo’s classic years. With the exceptional refinement of its Touring styling and award- winning restoration, the Alfa Romeo 6C 2500 Sport Berlinetta in Barrett-Jackson’s Salon Collection is among the greatest of them all.