Is it worth a punt?

I have been considering adding a 550 to my stable for a while now, and just saw this car on PH

It looks in great condition from the picture and the dealer is a well respected Ferrari specialist.

The fact that it’s a LHD doesn’t bother me at all.

I got a copy of the service history - patchy at best, especially the first 3 years of its life... doesn’t seem to be any documented service between inception and the first 18k Miles major service - see picture.

Would that history be a complete show stopper? Or would you consider that car on the basis of its actual condition, recent service history, the fact that cam belts were changed regularly and the reputation of the dealer? Obviously a throrough PPI would be in order?

Love the looks of these... but the link says deposit taken?

The deposit was refunded as the buyer didn’t get the financing he expected.

Always loved the 550 after following Enzos project one and seeing it in the flesh.
There is something special about a V12 Ferrari.

Did they come with running in oil? If not then a service 20 years ago isn’t something I’d worry about if it was reflected in the price. Looks like it’s had a service every two years since then.

All their cars are sale or return from what I gather.

This is the place I travelled 5 hours to for an appointment to look at a car, booked two days previously, only to find it was sold the day before. They never rang me. No apology, not even a cup of tea. I wouldn’t go near them.

Love the look of them, and would be tempted, but would rather hold out for RHD if it was a keeper.

Interesting but this was the place that condemned my Project 4200 saying it needed an engine and she's still going strong in NZ after I put the oil and water pump unit in.

If an independent inspection is favourable, go for it. The 550 is one of the best ever Ferrari’s. I once had to drive, quickly, up to London in heavy rain. The car was just so planted. And the balance is great, so you can drive it hard with real confidence. Same spec,age and colours as the one you are looking at (but RHD) - see below. It would a brilliant GT for your European summer holidays.

That history looks pretty normal to me and wouldn’t be an issue. It’s more than likely it had a oil change service early on anyway. Not that it would bother me now, 19 years later. 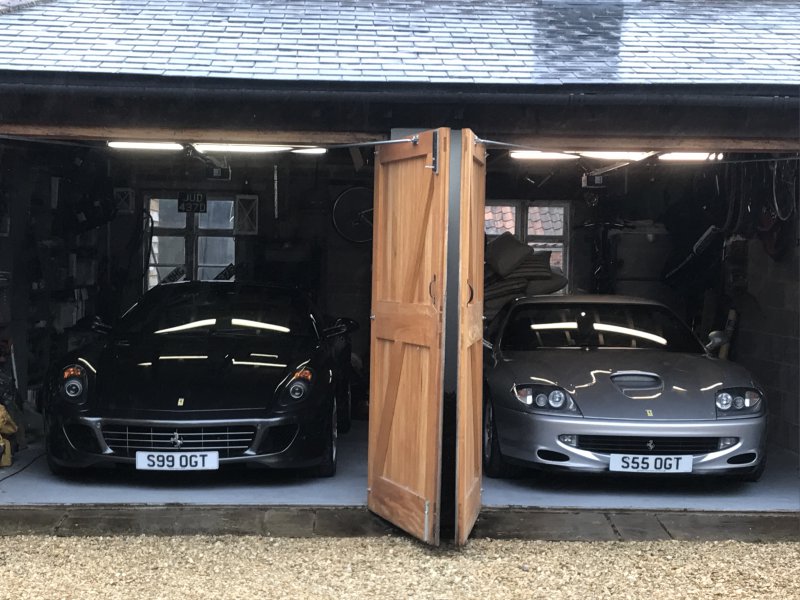 I was looking at that earlier..
Absolutely stunning.

I wonder how long this will last... perhaps it's not a dip in the market but more price correction as I believe some of these prices have been rather inflated for a while.

Mmmmm, 612 in dark blue with a tan interior and I'd be a very hapPea chappy. One day, although a Vanquish might get me first.

I wonder how long this will last... perhaps it's not a dip in the market but more price correction as I believe some of these prices have been rather inflated for a while.

The car looks great and the price is really good! I wouldn’t bother about the service 19 years ago as long as the car is inspected and serviced now. It is a V12 manual Ferrari...one of the best ever in my opinion.

I love the Ferrari front engine GT's especially the 550 Maranello with a manual box.

But the 612 looks so elegant

550 has aged much better than I expected, when I was growing up it was not the prettiest of cars but as modern cars have got much uglier it has definitely stood the test of time

Wild card for me is the AMG GT, they have got ridiculously cheap used considering they are a much improved SLS underneath... would much rather have it over a Ferrari California (either one) or even the Portofino. Not hating on the modern Ferraris though, I have seen a few 812's on the road and they are utterly stunning but majorly out of my league even the FF is more likely

Anyway so much for saying I would never have an F car to lusting for one after owning a Maserati for a few years. I still wouldnt have one of their mid engined cars, not because I dont like them but it's the dimensions, I don't find them comfortable inside due to the chassis configuration they are more suited to people who have shorter legs than me
Last edited: Aug 9, 2019