You Can Own The "Most Visible" Alfa Romeo In The World 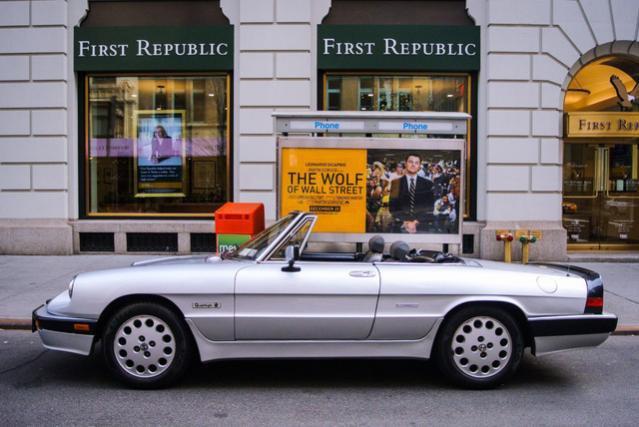 Do you ever look at your car and think "I wish you were more 'visible', like if you were in a movie or something?" Well, good news! This lovely little 1987 Alfa Romeo Spider Quadrifoglio now for sale on eBay has the solution to your problem. It's recent appearance in Martin Scorsese's The Wolf of Wall Street has made this car a bona fide star.1P

Except not really. In the ad listing, the seller claims that this car is the "most visible" Alfa in the world, and since the car was seen in the movie including its trailer and promotional clips, that is true to a certain extent, but misleading. Yes, while this Alfa has been seen by many eyes, it does not have a starring role in the film at all; its just a few seconds in the intro pulling up in front of a Wall Street building then that's it. P

I can think of another Alfa which might have a bit more "visiblity" than this one, like the Duetto in 1993 classic Wayne's World 2. KIDDING. Obviouslly this is just a spoof of The Graduate.2P

I digress, and I also don't mean to rag on the seller of the car. Perhaps they are a little overenthused about their car's big screen role, but it is certainly exciting. Besides, Alfa Spiders of this vintage are rather lovely things, a claim I can verify since I owned one. Sure they're unreliable, the electronics hardly work, and the 2nd gear syncros are nonexistent, but that just makes life interesting! Besides, its got a lovely twin-cam I4, its light, and it doesn't have any stupid power steering getting in between you and the road. This particular car is a good one too. The Quadrifoglio (four leaf clover in Italian) was the top trim level of the third-gen Spider , and based on the pictures/description this car seems to be in pretty good knick. This particular model isn't my favorite because I don't love the tacked-on side skirts, and "phone-dial" wheels, but I'm just splitting hairs. P

It might not be Dustin Hoffman's Duetto, but it's certainly a cool conversation piece and a lovely car on its own. It's making me wistful for my old one.

Series 3 Spider not the best of the bunch, a bit too federal for my liking - Oh and I don't give a toss if a car has been in a film or not

Thought I had the most visible Alfa