zagatoes30 said:
Well rust shouldn't be an issue on most of the panels as they are fibreglass, but the painstaking prep that has gone into sorting this out prior to building up the layers again should mean we have a great finish - just watching the timeline Silverstone Classic is just over a month away.
Click to expand...

Are they not taking the glass / rubbers out then Andy

alfatwo said:
Are they not taking the glass / rubbers out then Andy

Are you mad Dave, the thought of breaking any of that glass terrifies me. We can replace the external rubbers as I have a set but the rest will stay where they are

zagatoes30 said:
Are you mad Dave, the thought of breaking any of that glass terrifies me. We can replace the external rubbers as I have a set but the rest will stay where they are
Click to expand...

Calm down Andy, Pilkington has patterns for the SZ

Got a feeling James Wheeler of Black and White Garages had them commission front and rear screen patterns, It was awhile ago now though

"they made it last month"

Dave, the original SZ front windscreen pattern is held by a bloke in France, Pilkingtons will remake when you need one but not aware of rear screen or any other glass.

Jano at Autodelta had a new screen pattern commissioned but everyone who has had a screen made with that has found it doesn't fit properly.

Play safe leave them well alone for the moment.

The rear screen broke on my 4200 when they took it out , it was squeaky bum time for a bit as I was looking at £1500 for a new one or £500 for a used one but Matt found me one for about £150 IIRC , when I went to get it I was hoping for a near complete car with tons of spares at bargain prices but most of it had gone

The guy wasn't a Maserati breaker just dropped lucky , some guy had come down a hill , failed to make a bend , it had one of those high kerbs meant to deflect you back from the edge but he was going that fast the car took off cleared a 6ft hedge and landed 20m into the field where it rolled a number of times

The rear window was the only bit of glass to survive , not a straight panel on it

Well its back with me, just a couple of little bits still needed but looking great 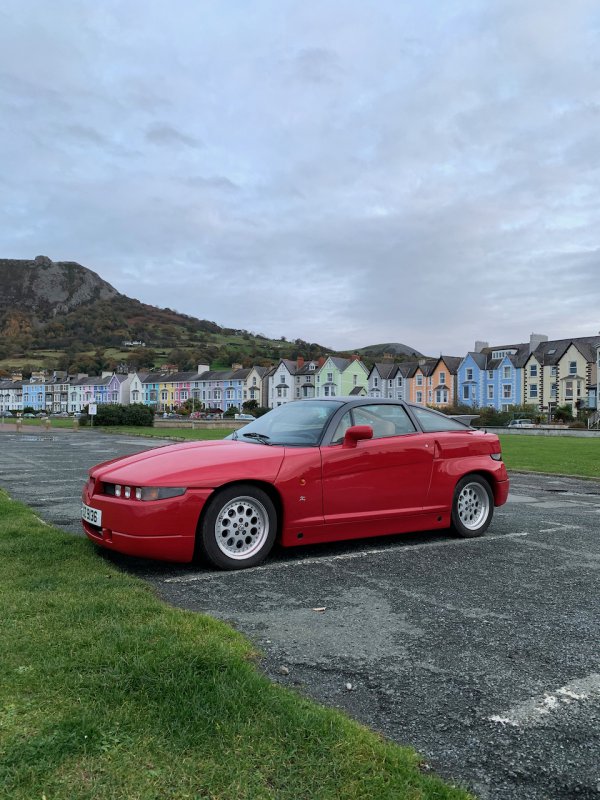